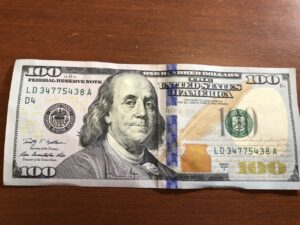 At face value, it looks just like any other $100 bill.

But as with many other donations given to SVDP, there is often a touching story behind them.

It was a cold January day when the sanitation engineer at St. Patrick parish on Bridge Avenue – where SVDP operates one of its hunger centers – stepped out of his truck and approached a staff member to inquire about making a donation.

The gentleman, who never offered his name, explained that he grew up in a single-parent household that was frequently helped by a local food pantry in the Akron/Canton area. He never forgot how important it was to be able to receive food when money was scarce, and he said that he wanted to make a donation on the spot to help others with hunger relief.

He took off his gloves, reached into his pocket and handed the staff member a $100 bill without asking for any type of acknowledgement.

The SVDP staff member thanked him for his generosity.  Before returning to his truck, the man looked back and instructed, “The money should be used where it would do some good,” and drove off.